In true third baby fashion, we are a bit late to the party with documenting the pregnancy. But as we anticipate baby’s arrival in the next few weeks here’s a bit of an update so far.

So this video is a little old… but it is still definitely worth sharing. It is from the first time we were able to get Jasper to really laugh.

Daddy was being very silly… Jasper was being completely adorable… And the end result was this damn cute video of him cracking up laughing for the first time!

Remember to sit down, take a breath, and enjoy the simple things in life… like giggling babies!

I managed to get a few minutes to sit and record our three month postpartum update.

It’s a little update on how mum and Bub are doing. And it’s only about a month late so we’re doing well!

*Yes, there is a bit cut out of the video about how Jesse is adjusting to the new addition. My bad! But rest assured he’s coping just fine. My editing skills however…

Last weekend we decided to take the kids to the Festival of Lights at Westfield Chermside.

And they absolutely loved it!!!

It was Jesse’s first time seeing fireworks… but, he didn’t get frightened, and in fact, he didn’t know where to look there was so much happening.

Jasper was also a little trooper, not even flinching when the fireworks started up!

We will definitely have to do something like this with the kids again!

If there are any Marvel fans in the house, put your hands up!!!

Yesterday, I finally made it into Brisbane and the Gallery of Modern Art (GOMA) to check out the Marvel: Creating the Cinematic Universe exhibit…

I have never seen so many awesome superhero things in place before. It was just amazing!

And as photography was welcomed, and I just happened to have my trustee Olympus mirror-less with me, I managed to get enough footage to put this short video together.

If you don’t end up getting to the exhibit first hand, I hope you enjoy this video instead!

Wow… what a journey it’s already been on this ride we call the ‘Not So Secret Life Of Us’.

Last week, we posted on Facebook that we had almost hit 600 likes. We promised that when we did hit that magic 600 likes, that we would release a special video to celebrate.

A video called, ’10 things you may not know about us…’

Again, thank you to everyone who has supported us on any of the many social media platforms we use. We really do appreciate it.

When Jesse was younger (not that he’s all that old now… hahaha), he used to love it when I would lay him on my chest, play music videos on my iPhone and sing along.

And it would appear that lately, he has started to enjoy this once again.

As soon as he hears the beginning of Heathens start playing, he runs over to me with a grin from ear to ear, climbs up on my chest, gets comfortable and just enjoys the music and my singing (as horrible as it is) while he drifts off to sleep.

Heathens… Stressed Out… Lane Boy… heavydirtysoul… he loves them all.

Now I don’t really know if the music video for Heathens is the most appropriate video for an almost 2 year old to watch, but hey… at least he likes good music right!!!

Yes. That’s right, this whole post is dedicated to the one and only… Peppa Pig. That infuriatingly frustrating children’s program that you just can’t seem to get away from once you have kids!

Well it would seem that, as we may have mentioned before, Jesse is a big fan of good old Peppa and George Pig. So much so that sometimes, it’s the only thing that will settle him down when he’s in a bad state with teething pain or if he’s sick or if he’s cranky. Now before the ‘Parenting Police’ come marching out of the woodwork and start chastising us for allowing our toddler to have screen time… I would like to say that we are aware of the negative impacts screen time can have on children under two, we do feel bad that he has screen time, we do however monitor his screen time, and that at the end of the day screen time is just part of modern day parenting. 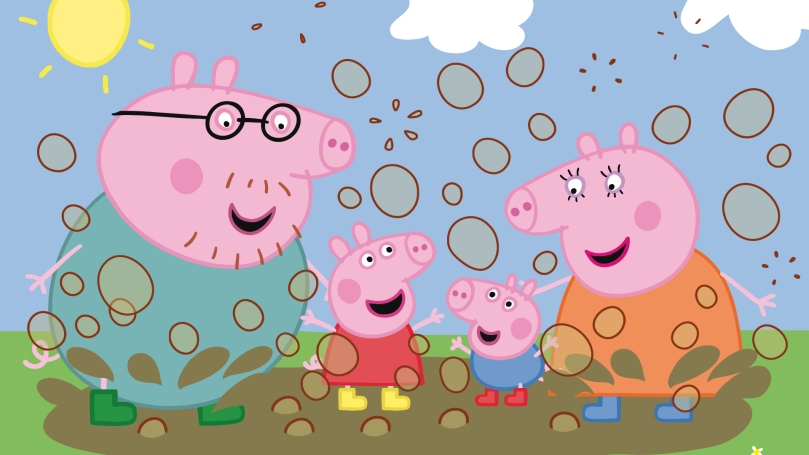 That all said, he loves Peppa Pig… Sassy attitude and all. And with the amount of Peppa Pig we have consumed as a result of being parents, there are a few things that I have learnt along the way. Now, don’t take this as a be all and end all list… these are just a few of the observations I’ve made and/or things I’ve learnt along the way…

So, my fellow parents… what about you? What children’s shows are your kids addicted to? What shows have you seen so many times that the images have been permanently burned onto your retina?

What shows do you absolutely 100% despise, but will find yourself sitting there and watching with your kids and secretly enjoying it.

And with that, I will say goodbye… because I’m off to watch some more Peppa Pig!

Time is absolutely flying by at such a rapid pace that I feel like we only found out we were pregnant just the other day.

And as time ticks by, there is one thing that we have been meaning to do. And that is, to create a proper Big Boy Bedroom for Jesse.

Because the room he was using still looked and felt like a nursery, we figured the easiest option for us would be to turn the spare room into Jesse’s Big Boy Bedroom, and move him into there, rather than converting the nursery and having to shift two lots of furniture.

And so that brings us to Sunday, 27 January 2017. The day we finally committed to creating his bedroom… and wow, did it turn out great!!!

We are so happy with it. In fact, I’m a little jealous… I wish we had stuff like this for our bedrooms when I was a kid!!!

But we did… We finally bit the bullet, went to Ikea and Kmart, stocked up on flat packs and the necessary trimmings, and created what is now, Jesse’s Big Boy Bedroom.

I think it turned out pretty good too… If I don’t say so myself!

As we head towards 22 weeks pregnant with our second baby we thought it was about time we did a pregnancy vlog.

So here is an update on the pregnancy so far.

Back to top
not so secret life of us
Create a free website or blog at WordPress.com.
Loading Comments...