I almost always say to them, as they continue to stare at me with that “are you crazy?!” look, that I’ve been working in the city ever since I graduated High School in 2001. So basically, a long commute to and from work is all I’ve ever known. And because of that fact, it has never really bothered me.

Well fast forward to 2016 and the long commute to and from work is getting just that little bit harder to take day by day.

Let’s put it this way… At the moment, I generally leave the house at 6:30am every morning and generally don’t get home from work until nearly 6:00pm most nights. And as for getting home by 6:00pm, that is assuming I get out of the office at 4:15pm every afternoon. If I don’t, well, depending on the public transport schedule, my home time could blow out to anywhere between 6:30pm to 7:00pm.

Unfortunately, this means that during the week, because of my long commute, I get very limited awake time with Jesse.

When I leave for work of a morning, Jesse is either still asleep, or has just woken up. And when I do manage to get home by 6:00pm, because at that time it’s smack bang in the middle of his bedtime routine, he is usually asleep (most of the time) not too long after I get home.

For that reason, I really cherish the time I get to spend with him during the week. Simply because of the fact that my awake time with him can be quite limited.

Just over the past week, there was one day where I didn’t get to see him awake at all. I left work when he was asleep. And when I got home, I got home to this… Our cheeky little monkey completely worn out from a big day asleep on mummy’s lap. Down and out for the night. 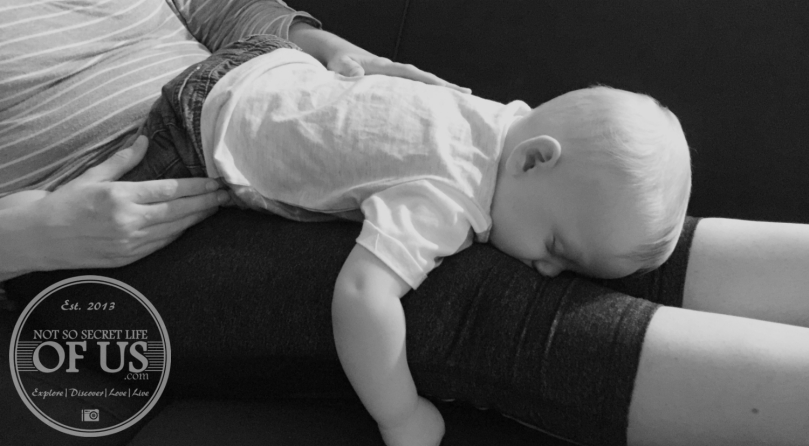 And this is the exact reason that I am starting to find it just that little bid harder, day by day, to accept such a long commute to work.

I know there are plenty of options out there available for people who have long commutes to and from work. Hot-desking at local work hubs… Working from home… Flexible work arrangements…

And these are all options I am really starting to think about with more seriousness as the days and weeks and months fly by with Jesse.

Because at the end of the day, time does fly by. I mean Jesse is turning one next month. ONE!!! I can’t believe that. And because it is flying by so quickly, I can’t help but feel bad that I am unable to spend that quality time with him during the week.

The saddest thing of all, is that I know I’m not the only one in this situation. There are a lot of mums and dads out there that have long commutes to work who don’t get to spend a lot of quality time with their kids during the week. And when there is so much flexibility available for work arrangements, I think this is very sad.

With all that said, I am thankful that Renee is able to spend all the time in the world with Jesse during the week given that she is a stay-at-home mum come Kangatrainer legend!!!

So while I continue to deal with my long commute to and from work, I will make the most of my cuddles in bed with him now that we have started co-sleeping again.

I know, that I will get to spend quality time with Jesse during the week soon enough!