My due date started like most days did in my last couple of weeks of pregnancy. Fairly steady contractions throughout the wee hours of the morning as I lay in bed wondering if today was the day. However unlike most days, they didn’t stop. Even once I was out of bed and going about my morning the contractions continued. Mild, but enough to know they weren’t braxton hicks and steadily increasing in intensity.

I knew the odds of babies coming on their due date was slim, but I could only hope. It was my last 24 hours to have the baby with my sister still in the country.

Well, he must have heard my prayers because just hours later, I was holding my baby boy. Once he decided it was time there was no stopping him. My contractions were getting stronger so at about 10.45am I started timing them. At 12.15pm we headed to the hospital and at 1.32pm Jasper James entered the world.

I was in a state of disbelief. From feeling like I was going to be pregnant forever to giving birth all within a few hours, I was definitely shell-shocked. Blissfully happy though. 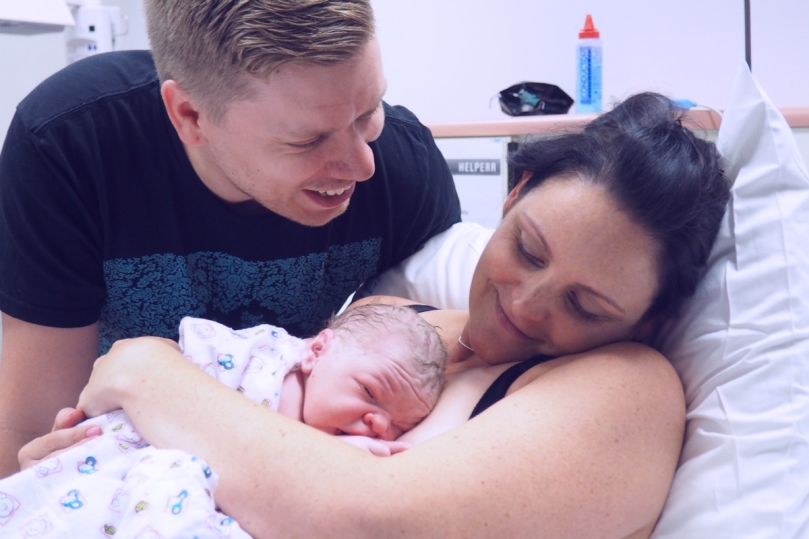 That afternoon, Jasper met his big brother and we had some family and friends visit. And when it was time for sleep, Jasper did just that. But I was still riding the wave of adrenaline. Between that, the hospital noise and the noisiest sleeping baby in the world, mama didn’t get much sleep that night.

By lunch time the following day we were bundled up in the car and headed home. Did they really just let us lose with a baby…again??

When there is a newborn in the house the hours and days just seem to disappear. We have spent the week hauled up at home in a beautiful little love bubble. The days lost in a blur of feeding, changing, baby gazing, visitors and of course continuing to ‘maintain’ a toddler.

Jesse has adapted exceptionally well so far. He is very gentle with his baby brother and loves to give him kisses and touch his ears. We know it’s a big adjustment for him so we are mindful to be patient and carve out special time that is all about him.

Jasper is sleeping and feeding like a champ. In fact I couldn’t believe how quickly he took to breastfeeding and how good he was at it from birth. With over a kilo on his brothers birth weight, I suppose that is a benefit of a bigger baby.

Mum and Dad are both doing well and settling into our new way of life. One week post partum and I’m feeling better each day. My labour experience was another beautiful one, albeit faster and more intense. A bit of gas and my support team got me through and there were no complications or issues (polite way of saying everything remained intact!). They weren’t wrong though when they said after-birth pains are worse with subsequent births. Ouch!!

Almost immediately after birth, the banter of a third child started and is now an ongoing joke in our household. Time will tell who wins that one…

For now we are absolutely smitten with our two gorgeous boys are feel incredibly blessed.